My third  juniper inspired love song, this one to…Ibiza and The 80s!,
I first landed there in 1988 on my first summer holiday with my pals. I was there for the second Summer of Love in 89 too. It was while there that someone told me about mythical Pikes Hotel.

By 1988, it was fair to say I thought George Michael was the coolest guy on the planet. His debut album Faith had come out the year before, and with the leather jacket, the sunglasses, the stubble, the earrings and that hair, I thought, yeah I’ll have some of that.
So by 1988, I (thought I!) looked the part.
I’d loved Wham years earlier, and thought their Club Tropicana song was great. Still do.
But it was that video that I played on repeat. The pool, the cool girls, Ibiza, the sun, cocktails.
I thought it looked the best place in the world to be!

So when someone told me while in Ibiza in 89 that that video was actually shot nearby, I just had to go. I hired a bike and headed out into the country near San Antonio. But as I pulled up to the entrance, I was told I couldn’t go in as it was for guests only. It must have been the look on a crestfallen 18 year old George Michael look-a-like that persuaded the guy at the entrance to take pity on me and  let me in. And as my mates were dive bombing in the pool back at our hotel, I was sat round the pool of the mythical Pikes Hotel, celeb spotting and sipping cocktails.

It was one of the best days of my life. And by the time I was 21, I had ditched plans to go to Uni, studied Spanish and grabbed a job as a Club 18-30 rep….back in Ibiza.

Through the 90s, I spent many summers living and working on that magic, mystical White Isle. And to this day I have many many friends there, some amazing memories,  and head back often.

So this gin is my ‘Thanks For The Memories’ to the 80s, which was my era, to Wham, to Club Tropicana, to Pikes, to Ibiza and to the George Michael, so sadly taken from us, way too soon.

Club Tropicana Edition Gin is made using 10 botanicals, that each create a superb backdrop for the main players to take centre stage. And they are;

Two flavours, with a vibrant sunny, colour, that just scream….IT’S THE SUMMER…DRINK ME NOW! And it may well be the easiest drinking gin I’ve made. Hell, that anyone has ever made!

On the nose, you will get a burst of passionfruit, with pineapple coming more when in the mouth. It’s still a gin though, so all that fruit is all kept in line by a strong backbone of  juniper.

Pineapple & Passionfruit. THE taste of SUMMER (remember it!?)

I think I may have a gem of a gin on my hands here. I do hope you agree.

*Ginfo leaflets about all our amazing gins.

*UNIQUE amazing GINFLASK – filled with another gin in the range!

*UNIQUE GIN LIGHT that lights up the bottle!

There are no reviews yet.

Be the first to review “CLUB TROPICANA” Cancel reply

As well as our fabulous MINI POUCH Boxes 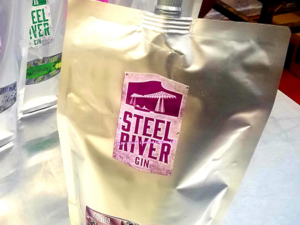 We do not share your personal details with anyone.

Find out more or adjust your settings.